The diagram shows that if 350 ma when the light output as 100%, so the light output 200 ma is about 60%, at 100 ma is about 25%.So can easily adjust the current size can adjust brightness. 1.1.1 to adjust forward current methodAdjust LED the simplest method is to change the current and the LED load series of current sense resistor (figure 2 a), almost all DC - DC constant current chips have a test current interface, is detected by internal reference voltage, the voltage and the chip control The current constant.But the sense resistor values are usually very small, only a fraction of the, if you want to put a zero on the wall a few of the potentiometer to adjust current is unlikely, because there will be a fraction of the lead resistance.So some chip provides a control voltage interface, change the input control can change the output voltage constant current value.Ling, for example, the company's LT3478 (FIG. 2 b) for changes in the ratio of R1 and R2, also can change its constant current value of the output. 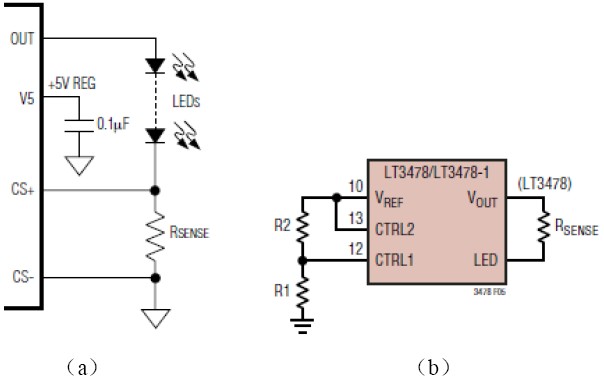